Before we start, you should know that I’m not a fan of Russian grammar. Apparently neither was the previous owner of this book-

– since my ‘used’ copy didn’t have a single mark in it. It’s unlikely this textbook will ignite a burning desire to stay up late studying irregular verbs (ugh), but I’m hoping it’ll at least provide some explanations for weird things I’ve memorized on good faith.

There are only 8 chapters in the book: The Sounds of Russian, Nouns, Prepositions, Pronouns, Adjectives / Adverbs, Numbers / Dates / Times, Verbs, and finally, Conjunctions. Doesn’t sound too intimidating… except for the EIGHTY PAGE chapter on verbs- that’s almost 1/3 of the entire book! No promises on that particular chapter, but I’ll be trying to cover 1 chapter every two weeks, meaning this project will be finished towards the end of August. (*update from the year 2020: hahahaha*)

While working through the text, I’ll be sharing what I’ve learned (or failed to) here on this blog.

I hope it will be useful and entertaining to you!

Schaum’s Outline of Russian Grammar, Chapter 1: The Sounds of Russian

→ The Russian alphabet has 33 letters, or as my husband likes to say: “one for each tooth and one for the tongue”.

→ Did you know the ˇ symbol is called a haček? Neither did I. (This symbol is used when phonetically transcribing the sounds of ч and ш…. č and š, respectively)

→ Words that begin with э, otherwise known as the 30th letter of the Russian alphabet, tend to be words of foreign origin. I looked at the first page of э in the dictionary and sure enough, the entries sounded familiar- эволюция, экзамен, экватор, экономист. The only word that I didn’t recognize was экий (what a….!). Turns out экий is not common/modern, but if you ever want to express something like “I do declare, he’s quite a fool“, use “экий дурак“.

→ The letter ш is modeled after the Hebrew letter ‘shin’ (ש), which is the inspiration for Spock’s live-long-and-prosper hand sign in Star Trek. Cool, huh?

→ The scariest word to pronounce: жжёт. What?

Overall there wasn’t much guidance in this chapter on the trickier sounds of Russian, like ш vs щ, ы… but that’s pretty par for the course in most textbooks.

I did find it useful to know which consonants should not be aspirated, as I’ve never heard any discussion of that before. It was also good to get a review of spelling and capitalization rules. For years I’ve been writing it as Новый Год instead of Новый год as well as capitalizing (incorrectly) the months and days of the week.

The chapter finished with 4 pages of exercises. I did about half of them, the ones I thought were interesting. Honestly, I almost skipped over this first chapter entirely because it didn’t seem like an exciting read. Bring on Chapter 2- Nouns!

Which books do you use to study Russian? 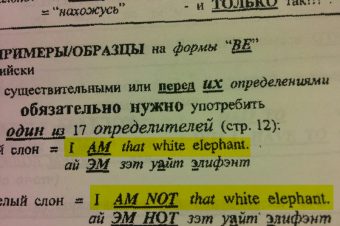 Check out what I just got my hands on: Aleksandr Dragunkin’s A Big Leap in... Read More 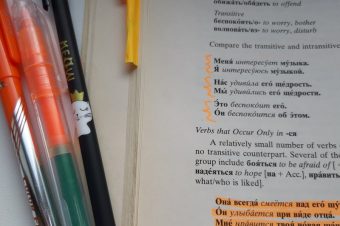 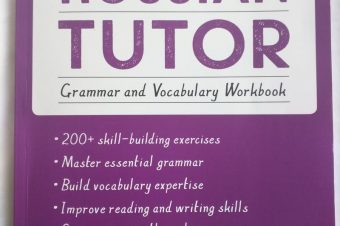 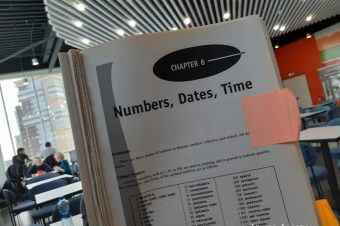 I went back and forth on this chapter. Ignore it? Do it? Actual footage of... Read More